Few areas in a home can prove as perilous as bathrooms. The Centers for Disease Control and Prevention says every year around 235,000 people over the age of 15 visit emergency rooms in the United States because of injuries suffered in bathrooms. The majority of these injuries, many of which require hospitalization, result from falls.

Injuries sustained in bathrooms typically occur in and around bathtubs, usually when a person is getting in or out of the tub. Falls occur when people slip on wet surfaces or get dizzy and lose consciousness within the tight confines of the bathroom.

Although bathroom injuries are mostly associated with the elderly, anyone is susceptible to such injuries. Debilitating diseases, instability from an accident or injury or even impaired vision can trigger a bathroom accident. Thankfully, some minor modifications can make bathrooms safer for everyone.

Grab bars
Unsteady individuals may rely on towel bars or shower knobs to provide some balance when maneuvering around bathrooms. But such items were not designed to support a person’s weight and can be slippery, making grab bars the safer choice.

Look for bars with slip-resistant surfaces instead of chrome plating. Bolted-in bars that are fixed to the studs in a wall, provide more reliable support than bars that employ suction to stay connected to the wall.
Install the bars where they provide optimal leverage and stability, such as close to the shower and on each side of the toilet.

Chairs
A bath/shower chair can make bathing safer. Pharmacies and medical supply retailers carry these sturdy, plastic chairs and stools which can fit inside of a shower or tub. They enable a person to rest his or her legs and sit while bathing. When remodeling a bathroom, have a seating area built into the design of the shower enclosure so that the addition looks seamless.

Transfer bench
Many injuries occur when people are attempting to get in and out of the tub or shower, but a transfer bench can greatly reduce the risk of such injuries. The bench is placed outside of the tub, and users just sit on the bench and then swing their legs over the ledge of the tub rather than stepping over while standing.

Walk-in showers
Some homeowners are eliminating tubs from their homes altogether. A walk-in shower provides a barrier-free entry into the shower, making it safer for those who have difficulty stepping into and out of bathtubs.

Lever-style fixtures
Knob temperature controls on faucets can be challenging to grasp for people with arthritis or poor grips. Lever-style fixtures are easier to maneuver and can help prevent scalding. These levers also are easier for children to manage. The National Kitchen and Bath Builders Association recommends installing pressure-balanced and temperature-controlled valves in the bath and shower.

Forgiving flooring
Tile may be preferred around the bathroom, but it can be cold and slippery. Investigate other water-resistant flooring materials that may be softer underfoot and offer greater traction. Rubber flooring made from recycled tires is one option that is gaining ground for its practicality and sustainability.

Changes around the bathroom can alleviate many of the risks that contribute to the hundreds of thousands of injuries that occur in bathrooms every year. 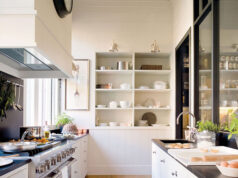 Can Your Kitchen Crises: 10 Steps To A More Organized Kitchen 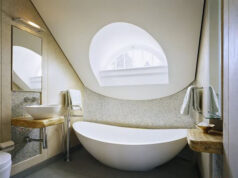 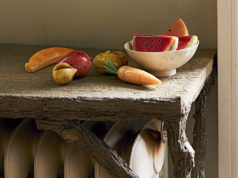